Second day at the DevDays. I had to work in the morning so I missed first two sessions I wanted to attend. I went to three sessions in the afternoon:

Adam Magee did his session around Software as a service and not so much about .NET 3.0 in my opinion. There was great overview of Saas as concept, its architecture, platform (Microsoft), maturity, multi-tenacy, identity and access (Windows Cardspace, open Id), interfaces, technology (AJAX, Extreme DHTML, AdobeMix, Sliverlight), Governance. For me this session was good, because it gave me a better view on Saas. I have some experience in this field when in the beginning of this year and end of 2006 I had to architect a framework for a customer, who wanted to host applications as a service.

Software as a service (SaaS) is a software application delivery model where a software vendor develops a web-native software application and hosts and operates (either independently or through a third-party) the application for use by its customers over the Internet. Customers pay not for owning the software itself but for using it. They use it through an API accessible over the Web and often written using Web Services or REST. The term SaaS has become the industry preferred term, generally replacing the earlier terms Application Service Provider (ASP), On-Demand and “Utility computing” (Wikipedia). This explanation sums pretty much up what Adam told the audience. So good talk, but not much .NET 3.0 there.

Next talk Windows CardSpace a technology I am not familiar with. Erik van de Ven from Microsoft did a super presentation about it. He started with an intro around identity problem, digital identity and identity federation. This was conceptual, before he demoed code (WCF). One can find of resources around CardSpace on the web: CardSpace, Microsoft, Wikipedia, Vista, and Windows Networking. I did not take much notes, since I was paying a lot attention to speakers presentation or discussing some topics with a former colleague Stefan Nijenhuis from Atos Origin (see picture below). 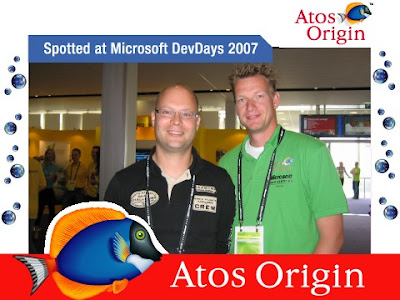 Last talk of the day and a nice closing round up for DevDays Lego Mindstorm NXT, Visual Studio & Microsoft Robotics. Speakers Alex Thissen and Anko Duizer demoed and explanation of Microsoft Robotics and how to program them using Visual Studio. Robots used in their demo where Lego. They programmed a couple of thing inside Visual Studio, so they could drive a robot (Lego) around with an Xbox controller.