To implement BizTalk solutions it is a good practice to have an DTAP environment in place. DTAP stands for Development, Test, Acceptance and Production. Development and test environments are equal (mirrored) and same account for acceptance and production. Deploying DTAP environments is easy, because there are many factors influencing outcome of DTAP. One factor is pricing and licensing costs. BizTalk is available in different editions and since BizTalk depends on operating system and database there are some configuration options to. Here is an overview of possible configurations for DTAP environments, hence there is a nice BizTalk Feature Dependency Matrix.

You can download the entire article as a PDF document.
DTAP Strategy: Pricing and Licensing

Besides features, there are non-functional requirements to reckon with like fail-over, availability and scalability. On Microsoft Pricing and Licensing FAQ section of BizTalk I found this on non functional side. In a large BizTalk Server 2006 R2 deployment, two key considerations ensure redundancy in all areas of the architecture and manage significant message volume:

Second, on the back end (the computer[s] on which the Microsoft SQL Server processing queue is located, and from which one or more front-end computers are pulling), it is also desirable to have “failover” should the computer running the SQL Server service fail. This is a standard active/passive SQL Server clustering scenario utilizing MSCS and, logically, is completely separate from the BizTalk Server 2006 R2 computer(s) in operation. This is what we are referring to as “failover” clustering. SQL Server Enterprise Edition and Standard Edition offer failover clustering ability. Note that you may use BizTalk Server 2006 R2 Enterprise or Standard with SQL Server Enterprise Edition or Standard Edition for failover capability on the back end. It is also often desirable to “scale-out” the SQL Server installations by providing more than one computer running SQL Server to support multiple message boxes. BizTalk Server 2006 R2 Enterprise is the only edition that offers scale-out ability and multiple message boxes.

This means that there are possibilities in configurations for BizTalk deployments in DTAP (as shown in picture below). 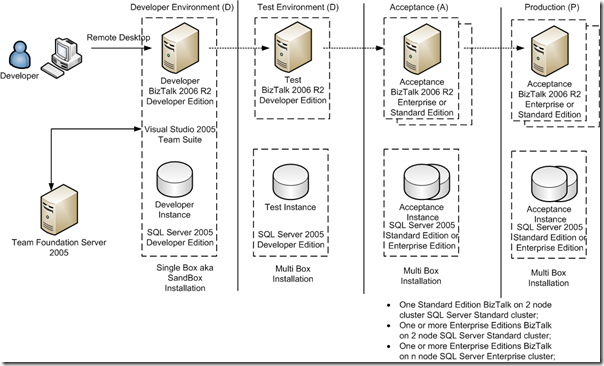 Regarding pricing and licensing I have recently posted a discussion on LinkedIn. In case of a BizTalk DTAP Strategy, which editions are suited for each environment?

One answer which I liked is the following and resembles how I think it should be.

“Buy an MSDN subscription for everyone who touches D, T, and A. That way, you don’t need any additional licenses for these environments. Use Enterprise Edition of BTS if you require a multi-server setup, use Standard Edition if you are OK with the risk of a single server setup. Use Standard Edition of SQL if you have one or two SQL Servers. (Two server clustering is available in SQL Standard.) If you need more than two SQL Servers for performance reasons, get Enterprise Edition. Use Branch Edition at the spokes in hub and spoke setups.” (Thanks Geoff)

Customers can benefit a lot having multiple MSDN Subscriptions regarding Development, Test and Acceptance. For Production valid processor licenses are required!

So far I have talked about cost factor of BizTalk Server alone in perspective of configuration options. There are more factors concerning a DTAP environment deployment, ‘Pricing and licensing’ is one of them and an very  important one.

You can download the entire article as a PDF document.
DTAP Strategy: Pricing and Licensing