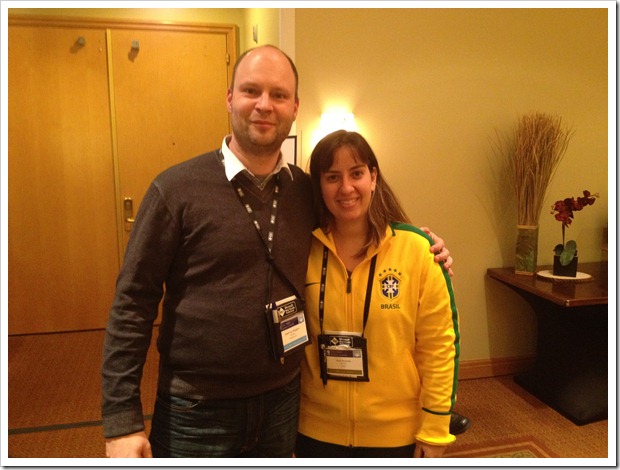 Ruth Resende is a 30 years old women from Brazil. She lives in Cubatao (a city near Santos) and works in Sao Paulo at Itgroup Consulting since 2008. For 8 years and counting she has been in the IT arena. Ruth started as a Delphi developer before one of her friends dragged her into the Microsoft world. Once in this world Ruth soon started working with BizTalk and became very active in the Brazilian community.

How did Ruth become so active in the Brazilian BizTalk community? Well one day she was configuring the HTTP adapter a couple of times and found the English tutorial hard to understand. Her English as she states is not very good. This brought her on the idea to translate the tutorial in Portuguese. By then she also found out that there was almost no BizTalk related information available in Portuguese. So she started writing blog posts in Portuguese on different BizTalk topics. Her manager noticed her activities and asked her to work with a team that writes BizTalk related material for BizTalk Brasil (a community blog). All activities combined (including MSDN activities) resulted in her being awarded MVP by Microsoft (see her profile here). Note she was the first women ever in Brazil awarded MVP.

When Ruth works on BizTalk projects she is more on the development and administration side. During development there are some features of BizTalk she really likes. Amongst these are the Schema Flat File Wizard, and Well-Formed XML Wizard, which both in her view improve productivity. In general Ruth finds BizTalk a great Microsoft product. However I quote:

“I really like work with Biztalk, but we are loosing market in Brazil. Over the years, the clients are disappearing. I hope next year Microsoft could reborn some strategy to Biztalk.”

Ruth likes to reads books, watch movies, animations and TV Series in her spare time. She not the sporty type, but she does like to play video games and as she states I quote: “Video games count as a sport :)” As you can see on the picture she is huge fan of the Brazilian soccer team (Canarinhos).
Ruth likes to share her experiences with BizTalk on the BizTalk Brasil blog. She states and I quote:

“What I write on the blog are my on experiences, and my intention is reduce effort of someone who experienced the same problem.I hope that I can help the community, make the BizTalk better known in the world.”

I like to thank Ruth for her time and contributions to the community. Ruth your English is fine!